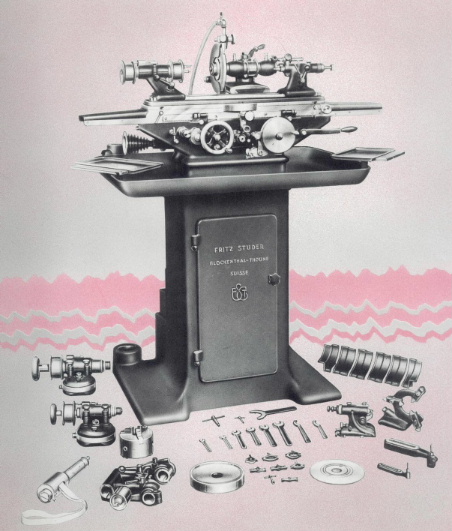 Fritz Studer AG was founded in 1912. The first cylindrical grinding machine produced was for their own use, but a modified version was exhibited at the 1914 National Exhibition in Bern. Studer cylindrical grinding machines made their first commercial appearance at the Basel Swiss Industries Fair in 1918 in the form of the model OA. This was a modified version of the machine Fritz Studer had made for his own use and featured automatic wheel infeed and a patented automatic reversing mechanism which remained in production until the early 1970s. 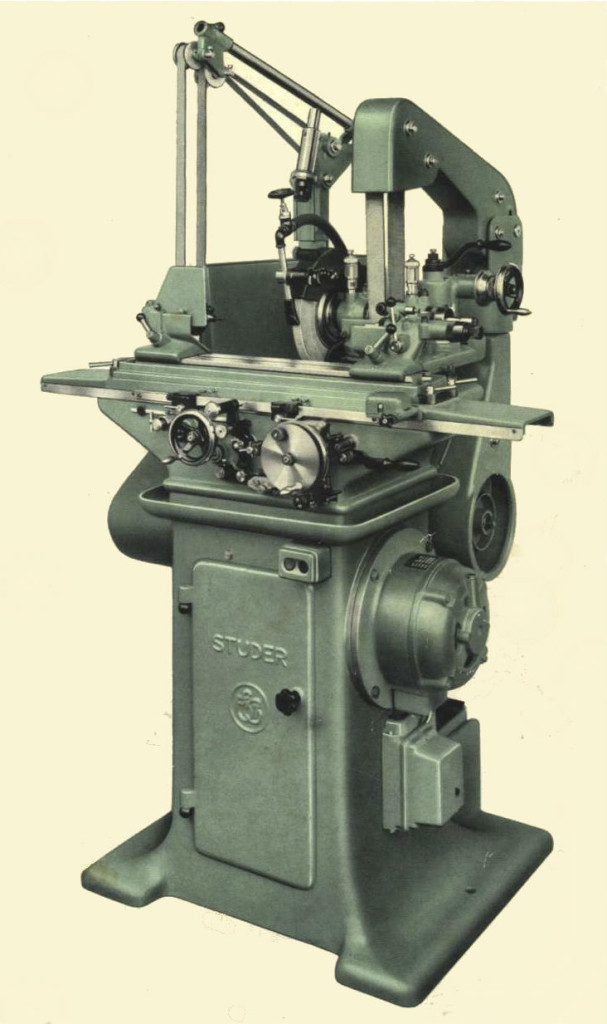 The Studer OB was the direct successor to the model OA and was produced from the mid 1930s through to the early 1970s. The OB could accept work up to 400mm long and 100mm in diameter. Around 1500 machines were produced and around 160 were imported to the UK with most machines destined for government bodies such as Royal Ordinance and Royal Mail research departments. 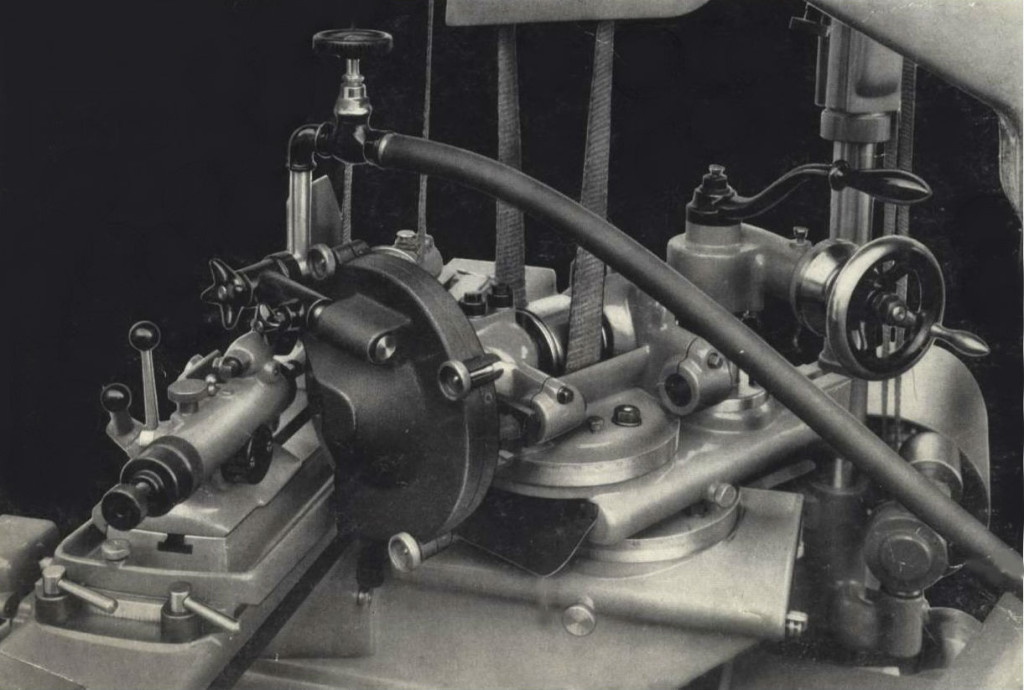 By the 1950s the design of the OB was looking rather antiquated, Studer had pioneered the use of hydraulic table transport in 1939 but the OB continued to use the mechanical drive developed before the Great War. What ensured the survival of the OB was its phenomenal versatility. Not only did it have the conventional table and wheel-head movements, but also a secondary wheel-head compound slide with screw or lever operation. This slide was mounted on a swiveling base allowing the wheel-head, which could also be independently angled, to be fed into the job at any angle. The wheel-head could also carry a second smaller wheel on the right hand end of the spindle further increasing the versatility of the machine. A wide range of accessories was available including various work-heads accepting Schaublin W20 collets, internal grinding attachments, work steadies and small part grinding attachments. 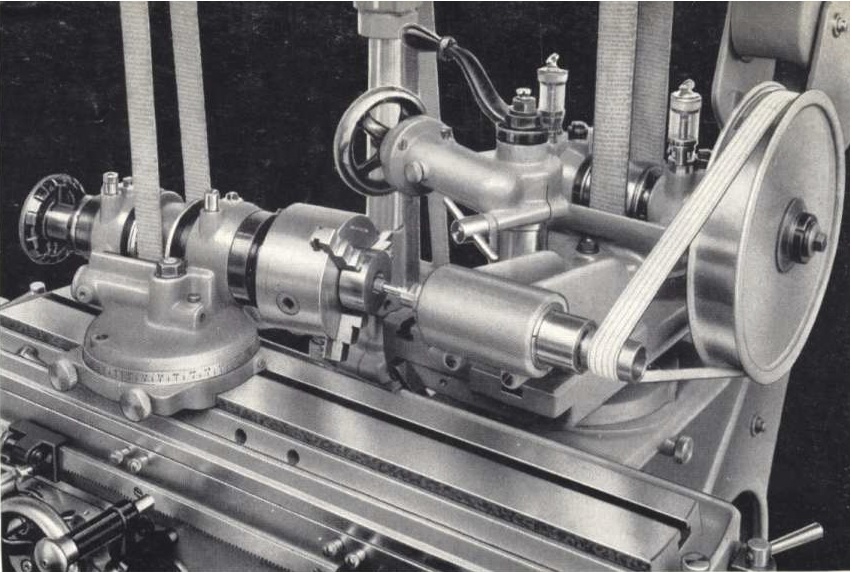 Internal grinding on a Studer OB

The versatility of this machine and its compact size continues to make it useful for certain industrial applications today. One firm I know of has a number of OBs, reconditioned at great expense, used in the production of specialist tungsten carbide tools. GEPY also have a number of OBs employed in the production of their excellent revolving centres and precision spindles. Until recently I had a very well equipped OB in my own workshop which was employed in the reconditioning of other machines. 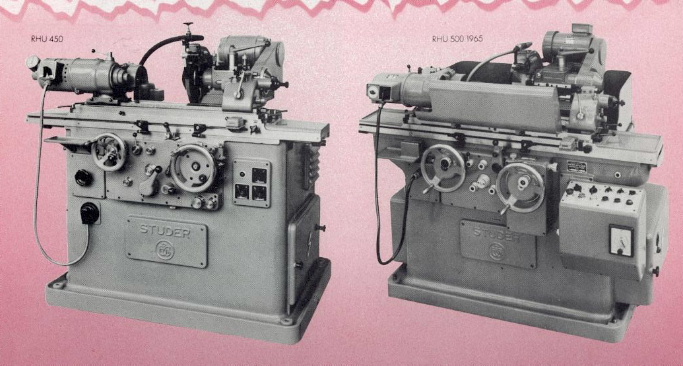 While the OB continued to have a strong niche in the market place, Studer continued the development of their products and in 1939 produced the world’s first cylindrical grinder with hydraulic table transport. The RHU450 and RHU500 were of greater capacity than the OB and are distinctly modern in appearance with close coupled motor drives for both the wheel-head and work-head. As with current Studer models these machines employed plain bearings in the wheel-head. 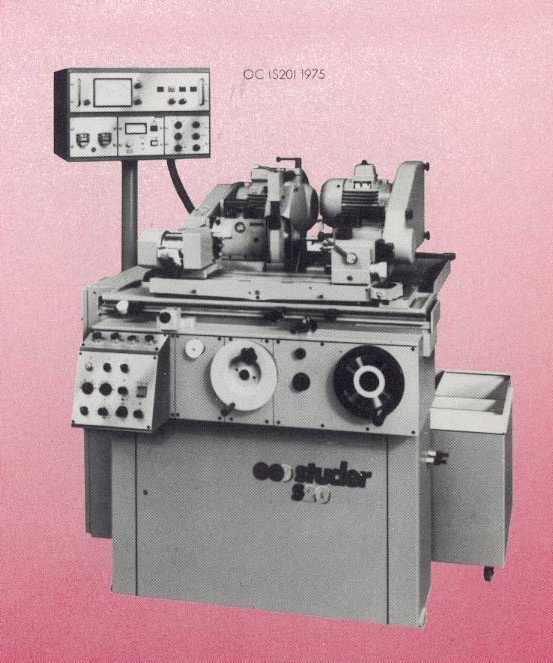 The model OC, now known as the S20, was designed as the successor of the model OB. This machine had similar capacities to the OB and still employed a mechanical drive to the table but, like the RHU450 and RHU500, had close coupled drives for the work-head (still accepting W20 collets) and wheel-head. The S20 was also fitted with a pull over internal spindle for rapid deployment. The S20 is a current Studer product. 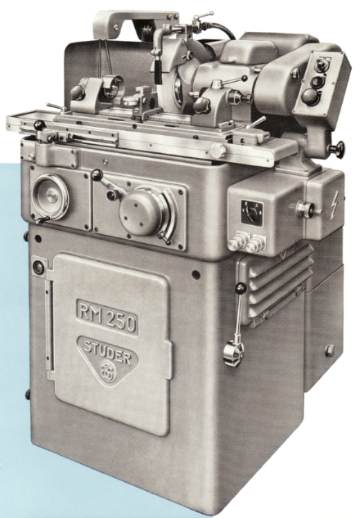 The Studer RM250 production cylindrical grinder was produced in fairly large numbers from 1959 to the 1980s. This superb little machine was designed for the production of small high precision components such as diesel injector needles. The work-head centre height was 60mm with a distance between centres of 250mm. Tables were electro-mechanically driven through a complex array of belts, servos and relays. Various accessories and special equipment was available for these machines such as auto-sizing equipment enabling them to be employed as semi-automated machines.

These machines are generally not suitable for tool-room type work, but none-the-less could prove extremely useful in the amateurs workshop. 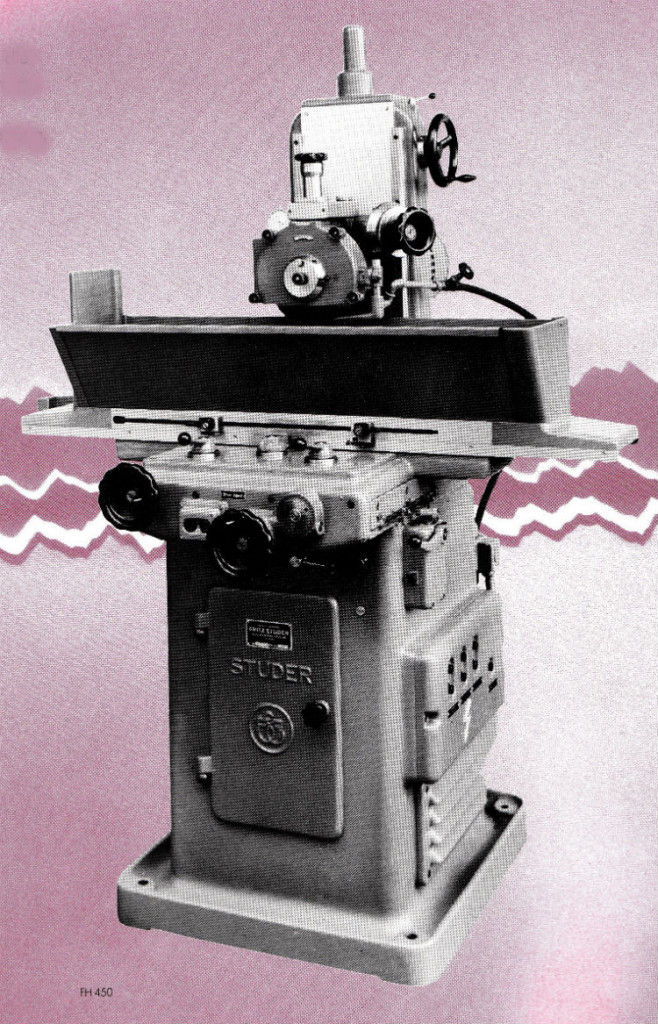 Best known for their cylindrical grinders, in 1946 Studer introduced the FH450 surface grinder. With a grinding capacity of 450 x 150 the FH450 featured hydraulic feeds to both traverses and could accommodate 325mm under the spindle. The machine was discontinued in 1967.