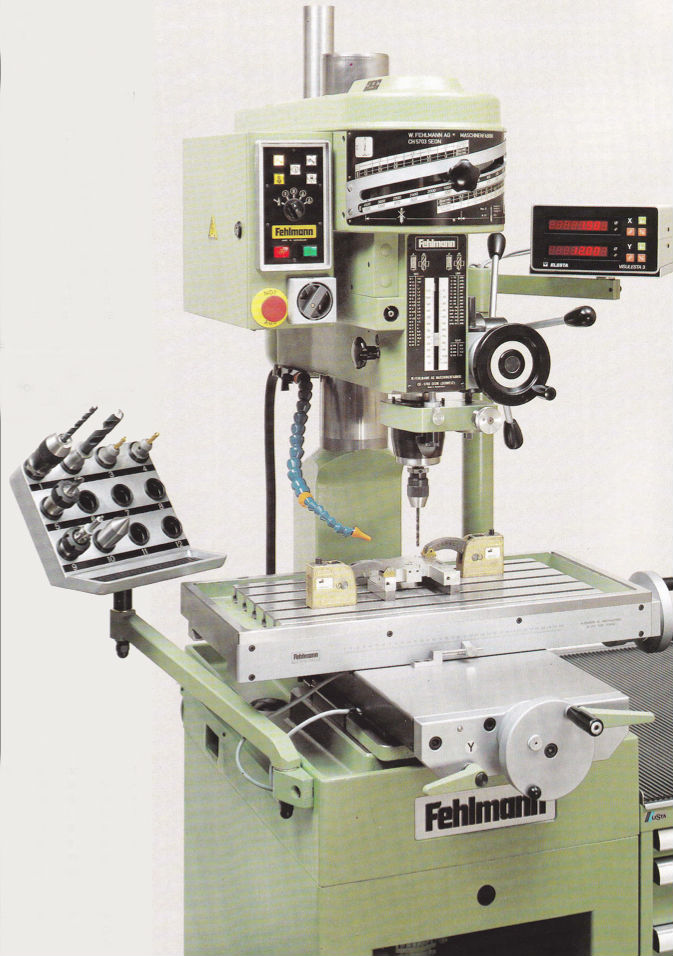 Founded in 1929, Fehlmann AG are best known for their range of high precision drilling and milling machines produced from 1958 onwards. While manual drilling/milling machines are still presently made, Fehlmann mainly manufactures CNC machines with the first NC Picomax models being introduced in 1975. Since 1958 over 12,000 Fehlmann machines have been manufactured.

Fehlmann’s TB13C machine of 1958 is recognisable as the forerunner of the  mill-drill format familiar to many hobby machinists, however the similarity to far eastern mill-drills ends at the conceptual level. Fehlmann machines are typically Swiss in the finish and fit of components and the standard of workmanship throughout. Fehlmann manual drilling/milling machines featured counterbalanced elevating heads, optional co-ordinate tables, and, on the TB13 and P18, infinitely variable spindle speeds and fine quill feed. 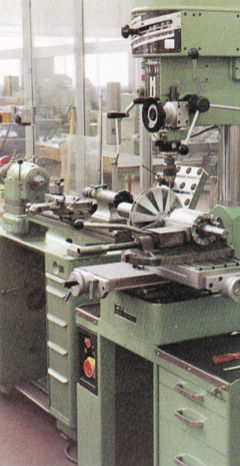 In 1968 Fehlmann introduced the P18 drilling machine and from 1970 machines were fitted with their SF32 quick-change spindle tooling system with a claimed tool-change of 3 seconds. Drilling capacity was a maximum of 18mm with a quill travel of 110mm. Using a two speed motor and mechanical variator, spindle speeds were infinitely variable from 132 – 4500 rpm. The P18 was offered with either a turret stop system for more production orientated work or fine quill feed with a micrometer dial calibrated in 0.01mm divisions for tool-room work. Machines were typically supplied with either of three coordinate tables giving travels of 280×210, 350×260 or 450×260 mm. A range of accessories including horizontal/vertical direct dividing head and tailstock, precision sine table and coordinate rotary table were offered in addition to a wide range of spindle tooling. On the dedicated cabinet stand machines with equipment could weigh in at as much as 650kg!

The videos below, kindly supplied by William Brem, illustrate the features and capabilities of the P18. Of particular note is the auto-start and auto-reverse tapping mode. 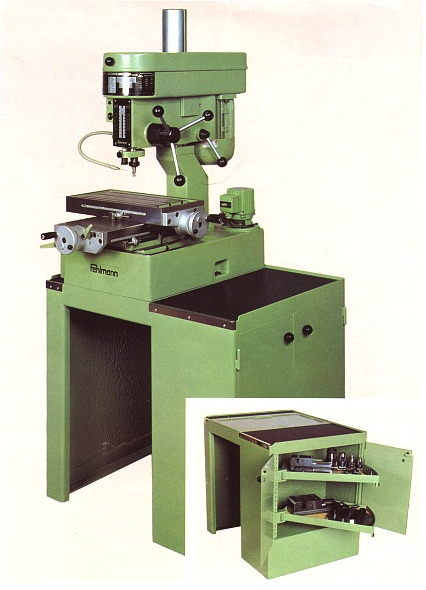 The smallest model offered by Fehlmann was the P10. With a maximum drilling capacity of 10mm, the P10 also featured an integrated tapping device with M8 capacity. The precision hardened and ground tool-steel spindle was carried in three adjustable bearings and could be run from 275 – 10,000 rpm in nine increments obtained from three pulley steps multiplied by three motor speeds. The P10s precision quill had a maximum travel of 80mm, could be clamped at any position and featured a simple depth stop. The counterbalanced head had a travel of 330mm. Equipped with a coordinate table the P10 could be used as precision boring and light milling machine. 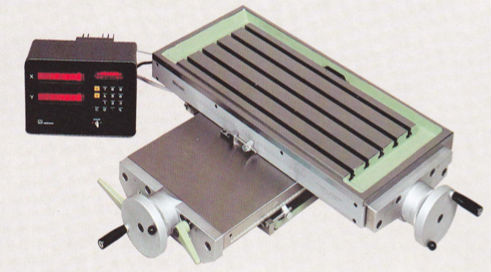 Fehlmann’s superb coordinate tables were designed to be not only used on their own machines but on any make of machine were such a table might be required. Oerlikon UB2 drilling machines, for instance, are often found with Fehlmann tables. They were also intended for use on spark eroders and special purpose machines. Nine sizes of table were available ranging from the KS140 (primarily designed for the P10 drilling machine) with a table surface of 140 x 320 mm to the massive KSV420 with a clamping surface of 420 x 910 mm. All models of table were built to a geometrical accuracy of 0.01mm in 200mm. Tables featured completely covered ways, quick operation slide clamping levers and large diameter ground feedscrews mounted in ball bearing pillow blocks. Feedscrews were fitted with large settable micrometer dials and slides feature rulers with adjustable pointers. Tables could be supplied with digital readout as an option and the larger of the current range of Fehlmann coordinate tables are available in either manual or NC versions. 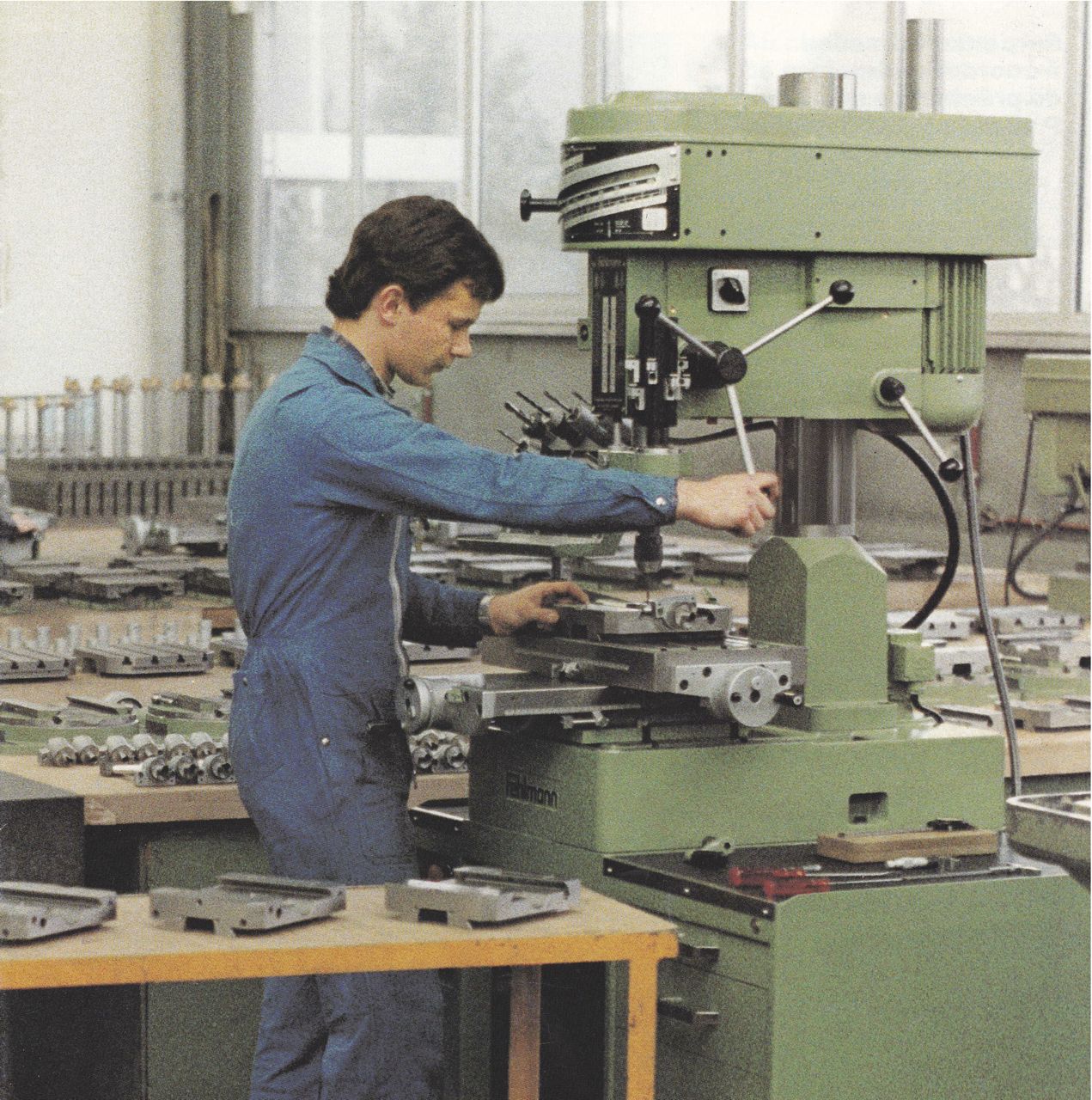