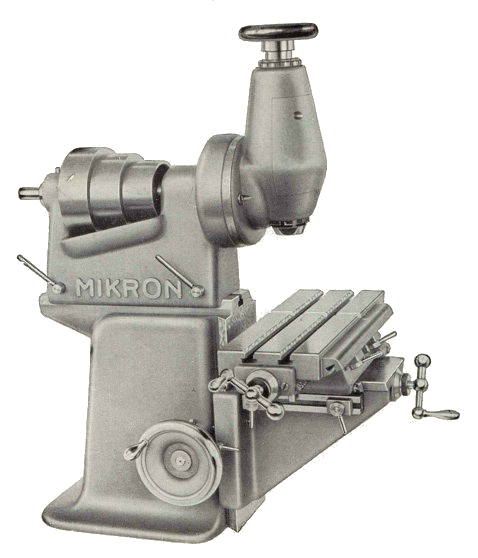 To complement the T90 lathe, Mikron produced a superb small milling machine which has not been made since the 1960s. Built along the same lines as machines made for the American horological industry by firms such as Elgin, Hardinge or Ames, the Mikron F75 was originally a fixed head horizontal machine. From the 1930s onwards the frame of the machine was made with a prismatic way, of the same dimensions as the T90 lathe bed, to accept horizontal and vertical headstocks. Like the T90 lathe, the F75 left the factory without paint. Early machines were left in bare cast iron – a testimony to the quality of the castings – while post-war machines were finished in a metal-sprayed nickle-based finish which resisted corrosion.

A conventional knee type machine, the machine’s 360 x 125 millimeter table had two T-slots with beveled edges corresponding to the bases of accessories such as vices and indexing heads. The table longitudinal (x) travel of  200mm was actuated by a conventional feedscrew, with an optional power feed attachment with knock-out device available (see below). 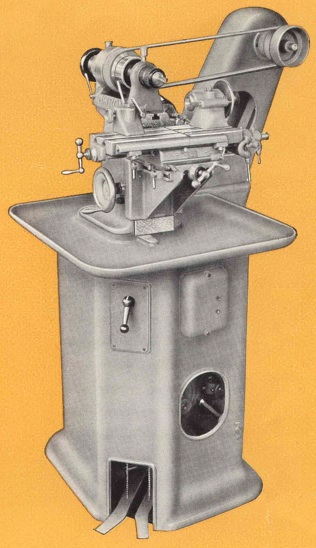 The machine’s vertical (z) and cross (y) travels of 160 and 80 millimeters respectively, were each controlled by a 50mm diameter drum type feed-screw and corresponding sectional nut which engaged with a relatively small part of the circumference of the drum forming something like a worm and helical rack. All surfaces and slide-ways were beautifully hand-scraped in a distinctive Mikron house-style.

A number of horizontal head types were available for the F75.

One main type was almost identical to the T90 headstocks with the exception of having a three-stepped rather than four-stepped pulley. The other main type of headstock incorporated a cylindrical over-arm with centre support. Horizontal headstocks were available with a ingeniously elegant epicyclic back-gear housed within the drive pulley itself and engaged by simply slackening a tangential clamp screw on the pulley and locking the centre section of the pulley with a rack-and-pinion actuated pin at the rear of the headstock. The vertical head could be swivelled 90 degrees either side of vertical with the spindle driven by a pair of bevel gears. All headstocks had adjustable cylindrical plain bronze bearings with ball-bearing thrust. Spindles, including those of the indexing heads, accepted Mikron’s version of the W20 collet, although Schaublin’s ubiquitous W20 collet will fit when used with the appropriate drawbar.

Machines could be supplied in bench mounted form with individual drive, but more than often are mounted on a one-piece cast-iron stand, with a bolted-on “trouser-leg” rising from the stand with the countershaft mounted to the end. The cabinet contained a beautifully engineered Brown-Boveri two speed motor which gave spindle speeds of between 30 and 1100 rpm depending on the type of headstock fitted. 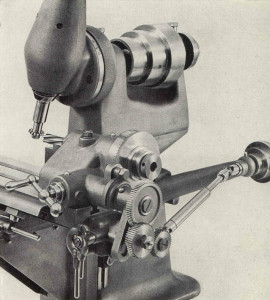 One of the most charming, and useful, accessories for the F75 is the table power-feed. Secured to the right-hand end of the table the power feed attachment consisted of a casting containing a worm and wheel drive and clutch. The clutch latching and unlocking mechanism consisted of a pair of inter-locking catches that owed more in design to the horological industry than mainstream engineering. Power was transmitted to the feed mechanism via cardan shaft from a miniature countershaft driven from the headstock. Somewhat inconveniently no feed reversal mechanism was provided and the belt had to be twisted to obtain reverse feed.

A wide range of accessories were listed for the F75 including vices, dividing heads, rotary table, sub-table and spiral milling attachment. 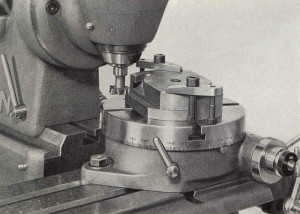 Made at the very apogee of the company’s machine building prowess during the 1930s to 1960s, the Mikron F75 is one of the most beautifully made machine tools I have ever handled. Fits and finishes are simply exemplary and while the F75 is nowhere near as versatile as the Aciera F1 or F3, it fills a gap in between these two machines that the Aciera F2 failed to live up to.

I have a Mikron F75 in my own workshop to which I have made a number of modifications that greatly improve its ease of use. Firstly, I’ve fitted an inverter control to the main motor giving infinitely variable speeds up to 2000 rpm. Secondly, I’ve fitted an independent dc motor drive to the power-feed countershaft which retains the original power-feed components but gives infinitely variable rates of feed and reversal of direction at the flick of a switch. The videos below feature this machine.