With a centre height of 102mm and 300mm between centres the Schaublin 102 can be regarded as a grown up version of the Schaublin 70. Indeed, the 102 has many features of the 70 in that it is a truly multi-purpose machine with attachments for milling, grinding, indexing and a host of other applications (see accessories).

Owing its design origins to the American WW type lathes, the Schaublin 102 has been manufactured for in excess of 80 years. Before WW2 the 102 was accompanied by a slightly smaller sibling in the form of the SV90. The 90 was identical to the 102 in all respects except for centre height, carriages and other accessories were interchangeable between the 90 and 102 machines. However, with the end of the war Schaublin deleted the 90 from their lists.

During its long period of production, although the appearance of the machines altered and the technical details have changed (ie headstock bearing design etc), the basic configuration and specification of the machine has remained the same. There is a remarkable consistency and interchangeability between early machines and the very latest models with parts and components from one era being employed on machines from a completely different period. This backward compatibility combined with superb build quality has meant that very elderly machines have continued to provide good and accurate service when other machines of the same age would have been scrapped.

Like the Schaublin 70 the 102 was available in three versions: 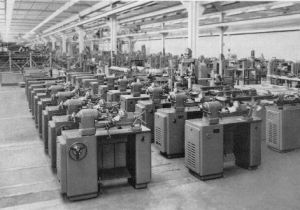 As with the Schaublin 70 the TL and TR versions of the lathe are production machines and more than often employ an F type push to close collet system which isn’t really suitable for tool-room type work. As this photo illustrates, the majority of Schaublin’s 102 production during the 1950s and 60s was of the turret machines which were extensively used in the production of precision components the world over. With the advent of CNC most of these machines were retired.

The tool-room version (TO102) is the preferred machine for the horologist or instrument maker since the headstock spindle accepts either W20 or W25 draw-back collets and has a screw operated carriage. Early headstocks employed plain bearings, but post WW2 machines were available with plain bearings with needle roller thrust or front double row roller bearing with thrust and radial load being taken by ball races at the rear. The later 102N models all used a pair of angular contact bearings at each end of the spindle. Headstocks were also available with 1:5 reduction gearing with post 1940s models having a clever single lever engagement system. Headstocks for W20 and W25 collets could be supplied with quick-action lever drawbar or manual hand-wheel drawbar. The later was fitted with a thrust bearing to assist in the precise pressure applied to the workpiece. 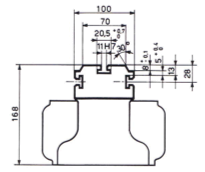 Beds are of a 30º prismatic profile with a central through slot admitting a pull down rod for the securing of carriages. A T-slot also runs down the entire centre of the bed and secures both the headstock and tailstock through the use of tenons operated by an eccentrics. Since headstock and tailstock both locate on the full surface of the bed section, regrinding of the bed to original specification will not impair headstock and tailstock alignment. Beds, headstocks and tailstocks were, and still are, made to a common standard geometry rather than being completely individually fitted to each machine (some fine matching of tailstocks to headstocks was carried out) in order to achieve a very high degree of interchangeability. From the 1930s onwards beds were provided with T-slots to the front and rear vertical faces for the mounting of accessories such as screw-cutting attachments. 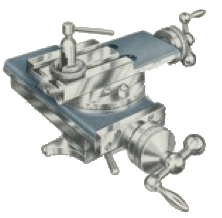 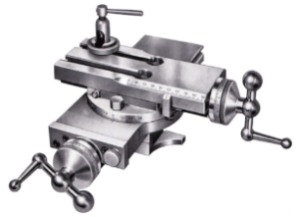 Two basic forms of screw operated carriages or slide-rest were made for the Schaublin 102. Earlier carriages can be identified by their painted surfaces while later carriages (introduced in the late 50s) have a ground finish on all surfaces. Later carriages also feature ball race mounted feed-screws (some post war earlier types also employ ball races as in the illustration to the left) and a very clever and reliable system for resetting the top-slide back to parallel to the spindle axis after taper turning. Both the earlier and later type of carriages employed taper gibs and trapezoidal form feed-screws. Later carriages were also available with a special long travel top-slide. The bed securing pull-down T-bolt on late 50s machines onward featured a thrust race between the bed and the hand-wheel to assist the application of the correct tension to the screw – a typical Schaublin touch of finesse. 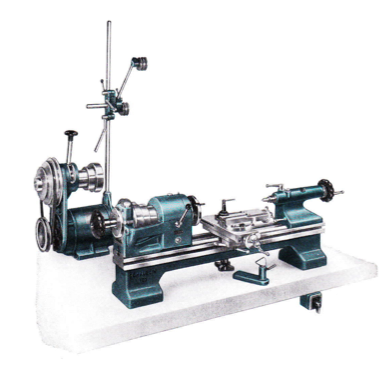 Like the Schaublin 70, the 102 was available in cabinet or bench mounted versions. From the 1950s, cabinet mounted machines had extremely heavy one piece cast iron stands containing the motor and countershaft bringing the over-all weight of the machine to around 400 kg. Cabinet mounted machines were offered with a variety of drive options including reduction gearboxes, clutch and brake countershaft and variable speed drive units (identifiable by the large wheel on the left hand pedestal). Motors were usually two speed with a commutating and reversing switch on the right hand pedestal. Production machines were often fitted with a knee operated forward and reverse switch. 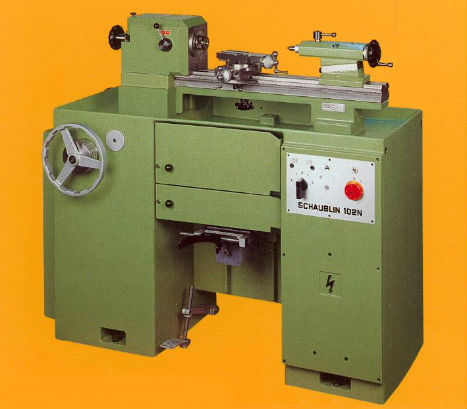 In the mid ’70s Schaublin introduced the 102N. Machines are basically the same as the earlier models but along with the general aesthetic trend in the machine tool industry squared-off angular castings were adopted. The machine shown on the right is fitted with a fully adjustable tailstock which no doubt made final adjustment in the factory much easier, but also ensured that such a machine could be reconditioned and set to original factory specification with relative ease.

The video below, shows the ease of use of the plain Schaublin 102 and also shows the excellent Tripan tool-post system. Note also the very nice after-market hinged bed extension for conveniently storing the tailstock when not in use – if any reader knows who made these accessories please contact me. Many thanks to the original poster of the video – Monsieur Djobinne – check out his interesting channel showing other Swiss machines: