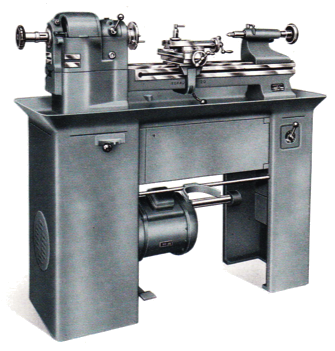 Produced from the mid-1930s, in design terms Schaublin’s 120 lathe was somewhat of a departure from their previous machines. The bed profile employed a “prismatic” raised V at the front and a flat toward the rear. With a centre-height of 120mm and a distance between centres of 500mm, the headstock and tailstock were aligned along this profile. The carriage, which was almost identical to that of the 102, sat on a separate sub-carriage located on the ways of the bed and clamped by means of an eccentric. The carriage assembly could be quickly moved to any position on the bed and the carriage itself could be easily removed and replaced with another type such as a grinding carriage (also of the same type used on the 102).

Headstocks accepted Schaublin’s W25 collet and were produced in a direct flat-belt driven or back-geared types. Versions with plain or roller bearings of the same type used in other Schaublin lathes were available. Two varieties of the tailstock were made during the machine’s 30 year production period. Following the same pattern as the 102, early tailstocks appear to take Schaublin’s own 2º tooling, while later and “magic-eye” types had 2MT sockets. 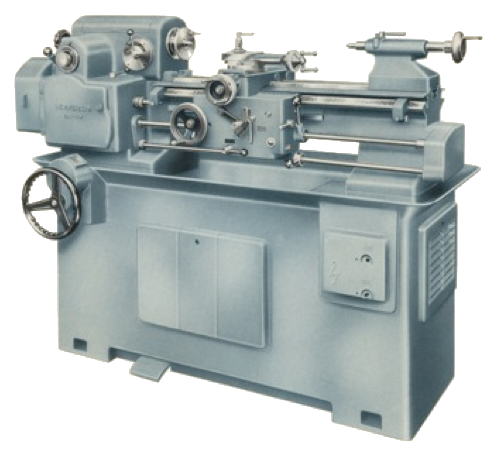 Schaublin’s plain 120 lathe is very seldom seen on the used market and the screw-cutting version, the 120-VM, while still rare, is more frequently encountered. The back-geared W25 headstock was driven by a wide flat belt via a speed variator and two-speed motor giving stepless speeds in four ranges from 50-1750 or 80 – 2920 on request. The first version of the 120-VM shared the 500mm between centres of the plain lathe, but this soon changed to 600mm. Mounted on a one-piece cast-iron cabinet the 120-VM weighted 900kg.

Echoing the design of the 102-VM, the carriage was carried on a prismatic V to the front and a flat to the rear. In addition to sliding feeds the 120-VM also featured surfacing (cross) feeds all provided by a belt driven feeds gearbox. 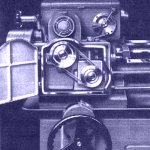 Early machines featured a pair of stepped pulleys with feeds selected by the position of the belt. Later machines retained the belt-drive but a knob above the gearbox cover gave 8 quickly selectable feed rates which could be set while the machine was running. In contrast to the 102-VM, feeds and screw-cutting functions were entirely separate and interlocked, preventing accidental simultaneous engagement of both. The 120-VM’s quickly selectable feeds were delivered to the apron via a power transmission shaft the motion of which was directed either to the rack and pinion for sliding feeds, or to the cross-slide feed-screw for surfacing. Knock-out stops were provided for sliding feeds in both directions. For screw-cutting functions the machine’s lead-screw, located in the centre of the bed, was conventionally driven from change-gears. However, unlike the 102-VM, no single-dog clutch was provided and threading operations had to be conducted with the use of the machine’s spindle motor clutch and brake.

Like the Schaublin 70 and 102, a wide range of accessories was available for both the plain and screw-cutting SV120 including overhead drive, milling and grinding attachments.