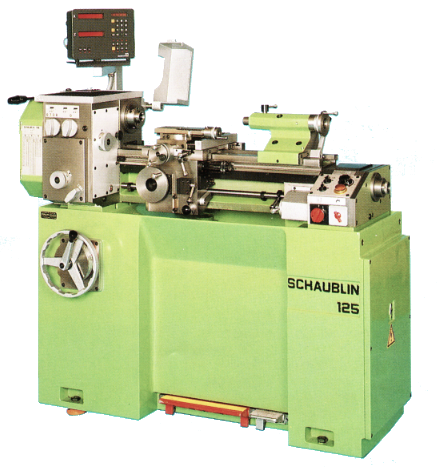 The Schaublin 125 high precision screw-cutting lathe is probably one of the most sought-after machines by the machine-tool connoisseur or tool-maker seeking the highest degree of precision, ease of use and flexibility. The 125 is the largest of Schaublin’s “universal” lathes – that is, lathes that are designed to accept a wide range of accessories enabling the machine to be used not only for precision turning and threading operations, but also for milling and grinding work.

Offered in three basic specifications: the 125A without screw-cutting equipment; the 125B with screw-cutting via change-wheels; and the 125C with universal screw-cutting gearbox. The latter, of course is the most highly prized on the used market and this article will mostly focus on this machine.

Brought to the market in 1971, the 125 was developed as a direct replacement for the 120-VM and largely mirrors its capabilities whilst also significantly improving over the latter’s specification. By the end of production in 1998 just over 2800 machines had been built – a fact that, combined with the machine’s compactness and versatility, makes the 125 command high prices on the used market. 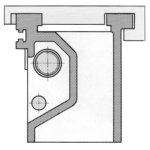 Constructed around a substantial ribbed cast-iron bed, the 125 had the centre-height designated by its model name and admitted 500mm between centres. The bed itself was hardened and ground and had a 200mm wide rectangular section with clearance between the shears for chip removal. 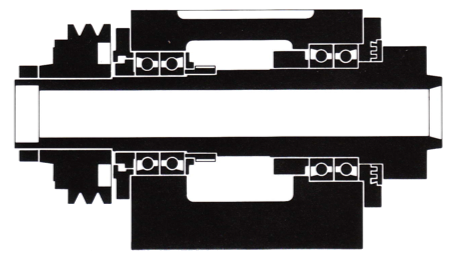 The headstock carried a spindle with a D1-3″ camlock nose and direct mounting of Schaublin B32 collets – giving a spindle that could pass 28mm and a collet through capacity of 24mm. The spindle was supported in two pairs of precision matched angular contact bearings, one pair at each end of the spindle. The bearings were pre-loaded and greased for life. No back-gear was incorporated into the headstock, instead an optional 1:5 reduction gearbox with multi-plate clutch was provided in the machine’s massive one-piece cast-iron 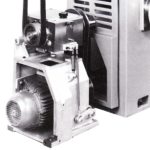 cabinet. With a two-speed motor, variator assembly and reduction gearbox, step-less speeds from 68-3000 rpm were available, while a special high speed version gave 100-4400 rpm. An electrically operated brake was provided to bring the spindle to an almost instantaneous stop. The 2 MT screw-operated tailstock was adjustable for alignment in the lateral plane, but was not offsetable for taper turning purposes. An optional star-wheel type tailstock with geared rapid and fine travel of the 3 morse taper barrel was available as an option. 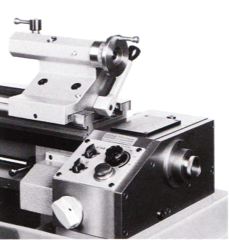 The 125 carriage featured both sliding and surfacing feeds entirely controlled from a feeds gearbox (fitted to all versions of the 125) mounted on the right-hand end of the bed. The feeds gearbox was powered by a variable-speed DC motor and featured an adjustable friction clutch tripped by knock-out stops or overload. Feeds from this gearbox were directly transmitted to the lead-screw for sliding feeds or carriage cross-slide screw via a shaft located at the rear of the bed. Since the gearbox was independently powered, feeds could be varied entirely independently of spindle speed. 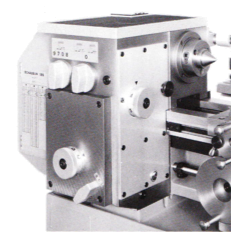 Screw-cutting operations were provided either via change-wheels (125B) or via the universal screw-cutting gearbox (125C). The latter gave 24 metric pitches from 0.25-3.0 and 72 imperial pitches from 112 – 6 tpi. A 40mm hardened and ground lead-screw supported on bearings nestled in a hollow under the front shear of the bed, thus protected from swarf and other debris. Schaublin made much of the 125’s screw-cutting functions:

The B and C versions of the SCHAUBLIN 125 are designed for screwcutting. This is why the cross slide of the carriage is equipped with a lever-operated retraction device.

On completion of a screwcutting pass the operation of this lever causes an instant retraction of the cross slide. When the lever is moved in the opposite direction, the carriage immediately goes back to its initial position and can be set for a second screwcutting pass, etc. 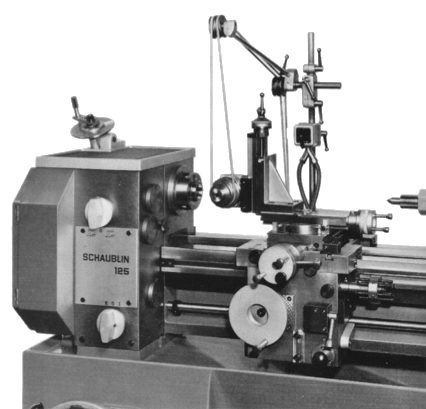 A wide range of accessories meant that in addition to the usual functions of a tool-room lathe, the 125 could also be configured for a wide variety of machining operations including milling and grinding. Like the 70 and 102 plain lathes, a dividing attachment converted the headstock to a high-precision dividing-head and a milling attachment, consisting of a vertical slide and W20 milling spindle, could be quickly fastened to the compound slide. Drive to the milling spindle or grinding spindle was provided by the same overhead drive equipment as used on the smaller Schaublin lathes.

The video below gives a good impression of the different functions of a 125C: