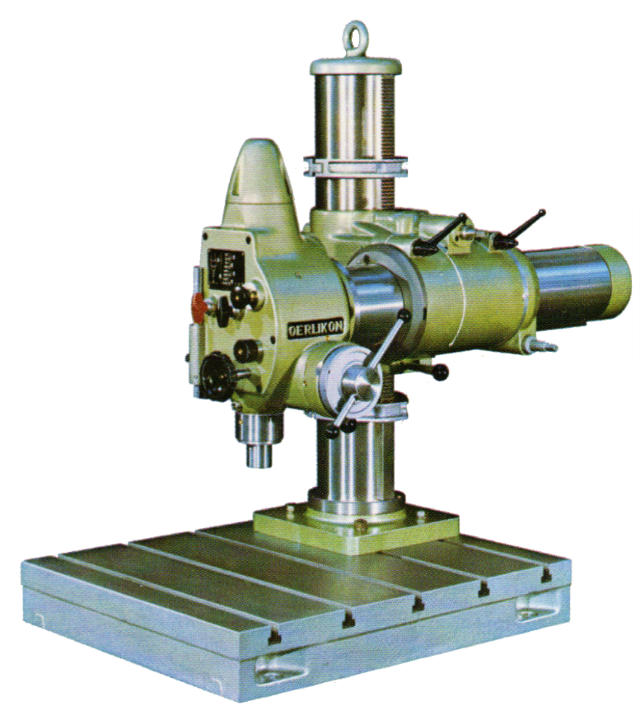 While the versatility of the UB2 drilling and boring machine cannot be doubted, at 600kg without equipment and on the simple base-plate, the portability of this magnificent machine might be disputed by the average home machinist. Probably designed to tackle work in Oerlikon’s own factories, the UB2 is a substantial drilling machine but is petite compared to most radial drills and certainly in comparison to Oerlikon’s other machine tools. Featuring a 3MT spindle with 8 spindle speeds from 25 to 2560 rpm provided by a two speed motor and four speed gearbox, the quill also features three rates of power feed proportionate to the spindle speed.

In terms of construction, the UB2 consists of a pair of 170mm diameter cylinders perpendicular to each other with the horizontal of the pair carrying a geared drilling head. A huge “cross-head” couples the two cylinders together whilst also allowing the rotation of both. Thus the whole cross-head and drilling-head cylinder can be swung 360º into any position over the table and beyond. Vertical movement of the cross-head is achieved via the use of a windless-type handle operating a worm and wheel controlled pinion engaging with a vertical rack. The necessarily low gearing of the vertical movement makes altering the height of the drilling head somewhat tedious – especially with the extended column machine. It is somewhat surprising that Oerlikon did not offer a motorised attachment for this purpose. The vertical rack is carried on an enormous thrust bearing at the base of the column enabling effortless positioning of the drilling head. While levers are provided for locking the cross-head to the cylinders, a pair of substantial clamps were also available to fix the position of the rack on the circumference of the column so that the cross-head could be repositioned vertically without altering its position around the column. A notable constructional feature of the vertical column is the fact that it is a single casting: the flange which couples the massive hollow cylinder to the base-plate is cast-in-one with it. The drilling-head cylinder can be traversed in and out of the cross-head by rack and pinion and rotated 360 degrees allowing unusual drilling operations like the one shown in the photos at the bottom of this page. A degree-scale assists in setting the drilling-head angle, while a lever locates the position of the head at 0º vertical and 90º either side of vertical. On very early machines the horizontal cylinder was manually positioned and no indexing to vertical or 90º was provided. 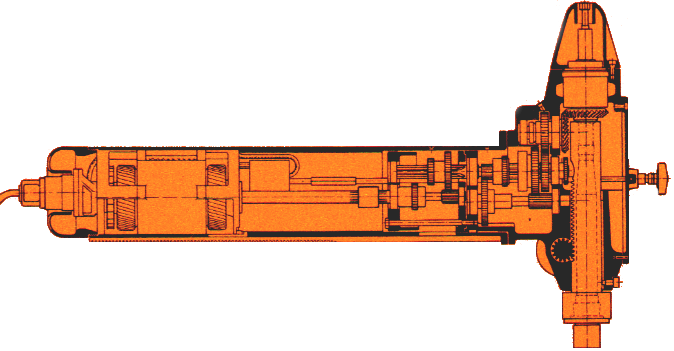 One of the most impressive features of the UB2 is the accommodation of the two speed spindle motor inside the end on the horizontal cylinder. All switch-gear, gearing to the spindle and quill feeds is also contained within the cylinder and drilling head. A simple three phase socket on the end of the cylinder is the only external connection required. Given the construction of the drilling-head and cylinder, it is somewhat surprising that Oerlikon did not opt to design-in an oil bath for the gearboxes. Instead, all lubrication is taken care of by an oil mist gun applied to numerous holes in the casing and coating all the internal components with a smoke-like dusting of oil. 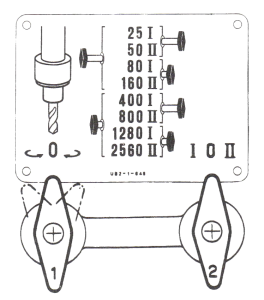 Controls for the machine are straightforward and conveniently placed. The gearbox selector controls consist of two knobs each of which can be displaced laterally in and out of the casing giving four ratios, while twisting the right hand knob selects between off (centre) and low (left) and high (right) motor speeds. The left hand gearbox lever can be twisted left or right to give forward and reverse direction to the spindle.

The rack and pinion operated quill has a huge stroke of 150mm and could be ordered with a return spring. All machines were fitted with an adjustable friction damper allowing the quill to remain at a set position rather than falling or returning under spring tension (where fitted). A neat little lever permits the disengagement of the spring-return mechanism (when fitted) altogether. Depending on the year of manufacture, the quill operating mechanism features a large micrometer dial with vernier scale reading in 0.1mm. Also dependent on the age of the machine, is the type of quill stop employed. Some machines have no stop at all while others use an external rod connected to the quill. Late machines have a internal stop with a scale built into the front of the head adjusted by a hand-wheel. A clutch built into the power feed mechanism disengages feed against the stop or in the case of overload. 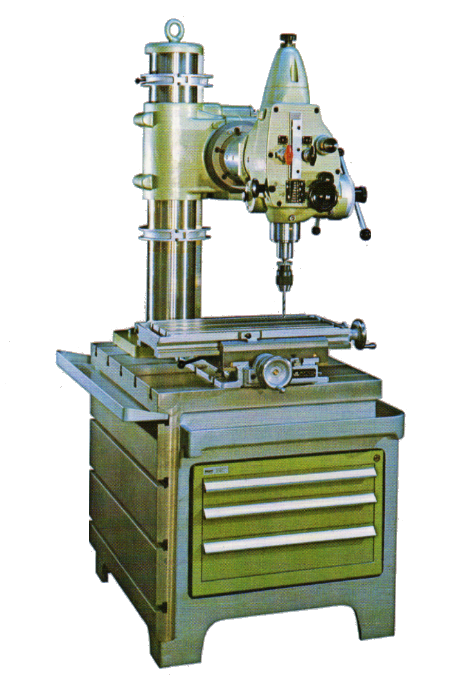 The 3MT spindle also features a threaded nose – like a lathe spindle nose – to which chucks or a quick-change boring attachment can be fixed. Spindle bearings are conventional adjustable double row roller SKF NN-type bearing at the front with a thrust race taking axial loads and ball races at the rear. The 3MT socket features a driving tang slot and a clever knock out device actuated by twisting a knurled knob on the top of the head and then smartly returning the quill home. A self ejecting drawbar was also available to secure milling chucks etc into the socket.

A knurled knob on the front face of the gearbox selects power feed rates. Feeds are engaged via a lever below the gearbox and adjacent to the quill manual-feed lever. Disengagement is achieved by pulling the lever downward on earlier machines or pulling a small lever, just behind the large manual fine-feed control wheel, on later machines. It has been said in another well know machine tool archive that these controls are inconveniently positioned, having a late UB2 in my own workshop, I can unequivocally say that this is not the case.

Two different types of base-plate were available for the UB2: one a simple T-slotted slab, the other a cast-iron stand with a second T-slotted face in the vertical plane and incorporating a set of storage drawers. Machines were sometimes supplied without a base plate to be mounted on a customer’s own stand or table. 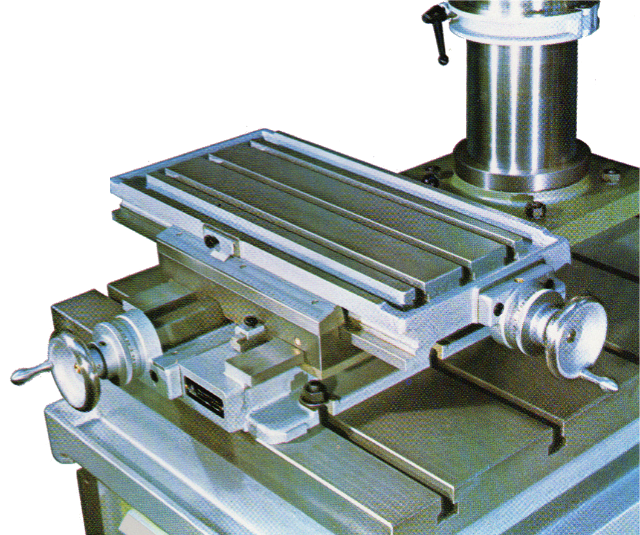 Oerlikon made their own heavy duty compound table to fit the machine, but the UB2 is frequently encountered with Fehlmann coordinate tables fitted. The Oerlikon table is built in proportion with the rest of the machine and weighs in at over 100kg. Despite its bulk, the action of the coordinate table is superbly light and features rulers and large clearly marked micrometer dials measuring to 0.02mm. Conveniently placed and efficient locks are provided for each of table’s axes.

While the Oerlikon UB2 is large relative to the average pillar drill, its versatility and ability to undertake milling jobs that are difficult on a conventional milling machine make the UB2 a useful addition to the amateur or professional workshop. Relatively plentiful in Switzerland, the UB2 is extremely rare in the UK. 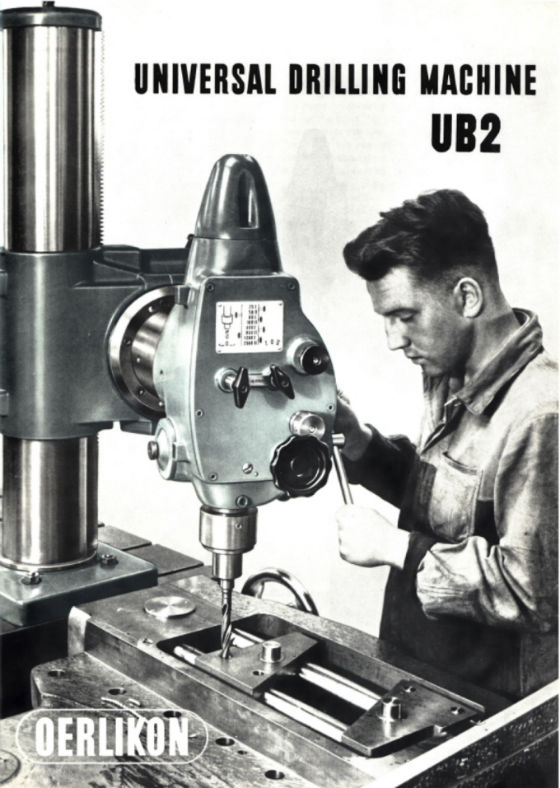