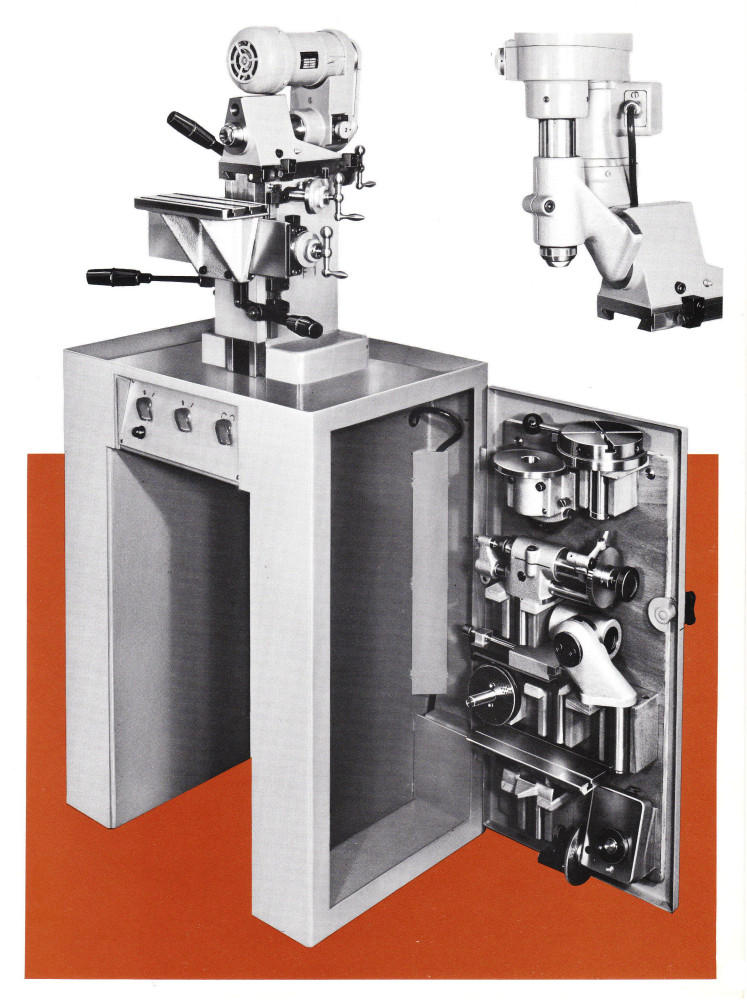 One of the most desirable small milling machines, the Aciera F1 is popular with horologists and other micro mechanics. A direct development of the earlier F12 machine, produced up to the late 1940s,  the F1 employed Schaublin’s W12 collet in both the cutter and indexing spindles. Aciera also used the same external thread on the indexing head spindle as that of the Schaublin 70 lathe spindle. Consequently, the F1 is an excellent companion to the Schaublin 70. With a working footprint of 1300 x 530 mm and a maximum weight of 210kg the F1 is small and light enough to be located in a spare bedroom. The 245 watt three phase 220/380v spindle motor  lends itself perfectly to being driven by a 220v inverter (VFD) giving not only the advantage of being run from a domestic single phase supply but also providing infinitely variable spindle speeds.

The smallest of Aciera’s milling machines the F1 had traverses of 100mm (longitudinal x axis), 75mm (headstock y axis) and 150mm (vertical z axis). The plain table was provided with three 8mm T-slots and had a clamping surface of 100mm x 220mm. The F1 came equipped with both screw and lever operated slides increasing the machines versatility. Sensitivity of the vertical slide was ensured by the use of an adjustable spring compensator located in the body of the machine.

The machines 40mm diameter quill and drive motor and gearbox assembly could be easily removed from the horizontal position and replaced with a swiveling vertical bracket into which the quill could be inserted. Thus, converting the machine from horizontal to vertical operation was an easy one-person operation taking a matter of minutes. In addition to the simple vertical bracket a universal bracket (inclinable in two planes) was also available.

Feedscrews were of “special steel” with ground trapezoidal thread form available in metric (2mm) or imperial (10 tpi) pitches and provided with large micrometer dials with a resolution of 0.01mm or 0.0005″. The non-adjustable cylindrical feedscrew nuts were of bronze alloy matched to the feedscrews and, when new, had less than 0.01 mm backlash. A locking cotter secured the nuts into the slide casting and could be quickly released to enable lever operation of the slides. Both horizontal slides were lever actuated by rack and pinion, while the vertical axis was by pivoted lever. Adjustable stops were provided for all axes. 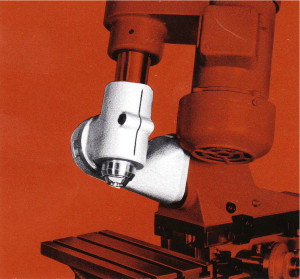 The F1’s dovetail form slides were ground and hand-scraped to a overall geometric accuracy better than 0.01mm. Slides were fitted with rhomboid section jibs with adjusting screws and locking nuts. Accessories were mounted to the longitudinal slide by means of a external male dovetail running the entire length of the slide. The plain table mounted directly to this dovetail while a swiveling universal support accommodated the 35mm spigot on both vices, tilting table, indexing head and rotary table. The universal support allowed simple and rapid exchange of accessories while the use of the external dovetail allowed the support bracket to be both positioned anywhere along the length of the slide and quickly removed and exchanged for the plain table. 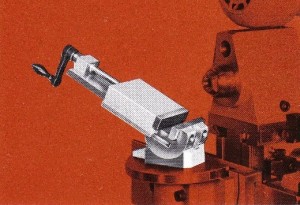 Earlier machines had a six speed spindle from a three speed flat belt drive and two speed gearbox while later (late 1970s onward) machines produced eight speeds from a pair of four stepped V belt driven pulleys combined with the gearbox. The earlier type of spindle employed a special needle roller bearing at the front end to take radial loads and a pair of ball races at the gearbox end to deal with axial loads. These early spindles are now a challenge to service if wear is present in the front bearing as the original fitment is no longer made. Later eight speed machines employed a pair of sealed angular contact bearings at the front end which are still available.

Another minor difference between earlier and later machines is the method of fixing the horizontal overarm cylinder. On earlier machines the Y axis headstock casting was slit through to the overarm bore with a pair of pinch bolts arranged to clamp the overarm cylinder in place. On later machines a more elegant method was provided with the overarm being internally clamped. In these machines the headstock casting is not slit through and the overarm rod is clamped by a “cross-plug” operated by a socket headed eccentric-ended rod through the centre of the cylinder impinging with the bore of the headstock. 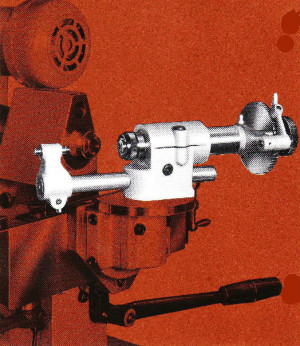 Machines were supplied as standard for horizontal operation without a plain table or other accessories. All other equipment was supplied to the customer’s requirements. 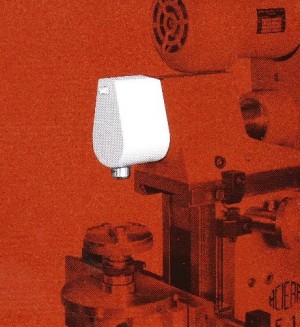 A vast range of accessories were available for these machines allowing a wide range of machining jobs to be performed. Probably the  most desirable accessories include the beautiful spigot mounted machine vice and the indispensable direct indexing head which could be converted to full dividing head with the addition of a very rarely seen worm and wheel gearbox equipped with three interchangeable indexing plates. Even rarer is the superb sliding quill drilling head and diminutive slotting head. 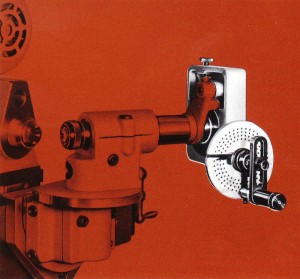 Accessories were accommodated in the doors of the substantial fabricated steel stand, each door being fitted with hardwood receptacles designed to accept a particular accessory. The stand also housed the machines electrical switches with later machines having a push-button low voltage switching system contained in an additional cabinet fastened to the rear of the stand.

The F1 was not always manufactured by Aciera “in-house” (see Aciera index page) and it appears that rights to manufacture it were retained in Switzerland when Aciera went into liquidation. An updated version of the F1 known as the F1+ continued to be made by Pizzi & Co in Switzerland after 1992. If any reader can provide further information on these machines I would be very grateful.

Some equipment from the very similar Sixis 101 will also fit the F1 without modification, suggesting that at least some of the equipment for both was made in the same factory.